Dr Marc Farr is on the road, busy developing the 2021 Information Strategy for an NHS Hospital Trust and an STP as he goes 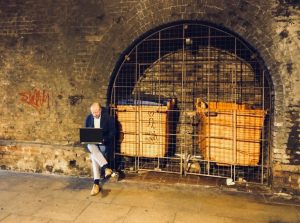 It’s about that time. I’ve been in the NHS seven years and written two Information strategies. The first one I wrote because I felt so far out of my depth in the NHS acronym hell that writing an Information strategy seemed like a fun way to spend my first 100 days in the NHS. I hoped it might also present an erudite thoughtful persona that I could trade off for a year or so until people realised that I had absolutely no idea how a hospital ran.

The first strategy developed in 2011 probably reflected the previous seven years I had spent at Dr Foster, studying at the altar of publically available outcome data – I proclaimed at our board that East Kent Hospitals would become ‘the most transparent trust in the country’. ‘Don’t be an idiot’ replied a NED and so instead we set out to ‘develop a knowledge culture’. We made great strides with a formidable team of analysts, winning awards for our business intelligence function.

Time passed and a sense of deja-vu returned; fantastic analysis being produced by a great back office function but never quite achieving the engagement with clinicians, managers and patients that we had dreamed off. Information Strategy 2.0 was born – a journey from the four Ts of Transparency, Timeliness, Triangulation and Timely through the three Ps of Prediction, Publish and Push through to the two Ss of Socialise and Sticky (how to make information part of your daily routine).

Decent progress was made. Dashboards became mobile and staff other than execs and senior managers were provided with simple accessible data in different mediums according to how they wished to digest it. Patient tracking lists were built for a vast array of services from Pharmacy to Dietetics to Maternity to Stroke, as well as the staples of ED and Inpatient areas. Board reports became automated and Demand and Capacity models were developed at a level of sophistication beyond anything the regulator or the traditional management consultancies were offering.

To now. A new set of circumstances present themselves, different enough to require a re-write. These are the contextual factors in the summer of 2018.

A. An internal independent thinktank

After a period of a very stable board, our Trust reverted to NHS type and introduced a revolving door board, constant change to personnel at Executive level. It may well settle again but if most trusts have regularly changing teams then there is an requirement for mature Information teams to assert some independence and direct their own destiny, from leading the debate on what data is reported externally to considering whether it is a carrot or a stick that clinicians need to change their practise to bring it into the norm and eliminate variation – the lesson from every other industry in the world but most often shouted about pompously by those that run airlines.

While Information teams are too rarely represented at board level, usually lost for convenience within Finance, Strategy or Operations there is scope for them to begin to publish, more boldly, uncomfortable truths. If clinicians do not achieve a VTE target, that takes one on a journey through publishing data on the wall of the ward, to encourage an ‘interesting debate’ between relative and nurse…to publishing on an intranet at specialty team and then clinician level to ultimately publishing publically for patients and commentators.

B. Remember why we are here

The recent articulation on ‘clinically led, professionally and managerially supported’ is key. Yes, the ground crew and the baggage handlers play an important part in running an airport but they are there to serve the pilot. There is an Indian mantra which translates roughly as ‘you are either the doctor or you are there to support the doctor’. Trite this may sound but it becomes very relevant right down to deciding how to spend your time, assisting a clinician will always trump meeting a commissioner, finishing the report you planned to complete that day or getting up to speed with your mandatory training for health and safety.

Strategically the implications for this are that our aim should be to empower clinicians with data, not just managers and executives. It would be fair to say that the latter are often well served but the former are not beyond some erratic cursory spreadsheets with some crude length of stay figures on. It sounds a wicked problem because there is a relatively manageable number of managers and executives but a very large number of doctors prone to lose passwords, forget intranet short cuts and forget how the statistical adjustment was calculated for their return to theatre rate. It implies a significant engagement challenge but one that hopefully technology can begin to address.

Big data is like teenage sex. Everyone talks about it a lot and claims they are doing it. In reality nobody is quite sure what it is, what success looks like or who to form relationships with. As a result Big Data conferences from Las Vegas to Barcelona become the youth club discos of our teenage years. As hazy as it is though, NHS organisations need to begin to plan to employ an evolving range of people so that analysts actually conduct analysis rather than move data around. ‘Data’ specifically as opposed to Information, Intelligence or Action which should be the point of an Information Strategy. Most NHS Information teams have a corporate function, some sort of team that faces off against the operational teams and maybe a development team that liaise with data warehousing providers internally or externally and find themselves responsible for the latest business intelligence offering by established and emerging providers. A decent one will begin to consider open-source solutions and build relationships across a region to collaborate and hopefully generate economies of scale.

The new strategy that we will develop will incorporate a new fourth function of Advanced Analytics, rapidly becoming the missing piece. All of this in the context of a research strategy for an NHS organisation that has Information at the heart of it, however it is articulated be it Advanced Analytics, Big Data, Intelligence and so on.

Until very recently a motorcycle courier arrived in our Trust to collect the board reports and then deliver them to down the back of the pile of logs outside our NED’s houses. Thankfully email is involved now but it doesn’t represent a big leap for an expert within our Information team to release a monthly/weekly daily blog/youtube video/podcast to give an overview of Trust performance rather than, or maybe summarising, our dear old written reports.

A doctor’s phone should vibrate when their patient’s blood results are back and a specialist Oncology nurse’s phone should beep when a Cancer sufferer is admitted unconscious to the emergency department. Accessing performance from the intranet should feel like browsing the BBC news channel, not visiting the Kremlin, or worse still the NHSE site. EPRs will come in like the tide, fast in some places, slow in others but they will come in and should be seen as an opportunity, a medium, to share data with our clinical staff, see B above.

It’s depressing to see posters in front rooms that claim to support the NHS by smashing STPs. STPs seem like the best recent example of hard-working NHS staff finding extra time beyond their day jobs to try and work together better. They present genuine opportunities to develop economies of scale by sharing core functions such as data warehousing, software development or more widely workforce development. The initial strategy for Shared Health Analytics for Kent and Medway seeks to deliver against three substantial challenges; the coordination of population health management planning and research, the embedding of the use of predictive data in the hands of operational teams and the live management data for all system players to share.

F. Data is the new Oil

The blurring of lines between Information, Service Improvement, IT and Ops continues apace. Information in its widest sense is all data within an NHS organisation and should include Finance, HR, Estates, Strategic Development and so on. To fully understand when an emergency department fails or succeeds analysis must become more sophisticated than counting ambulances. The fact that when Dr X and Dr Y work together performance is always dreadful should not be a surprising finding when it’s eighth time it has happened.

Data quality is crucial and programmes and processes need to be developed that ensure its continual improvement.

Last but most important is the culture that we create for our workforce. As a Director of Information all the leadership and management literature you are only responsible for creating the right environment for your collection of young bright things. Increasingly staff welfare is being described front and centre in NHS Trust’s strategies; Great care from Great people, that kind of thing. Engaging with staff to understand their motivation for coming to work and even beginning to segment them on that behalf are very useful exercises. Some people want to earn more money, some want less stress. Some want to study, some want to learn how a hospital works operationally. Some want to flex their working life around their personal one to create the right balance.

There is an important difference between just acknowledging this and between explicitly describing it in a strategy.

With these contextual factors in place, we can begin to engage with our staff and patients to develop a new strategy that should be fit for two to three years.